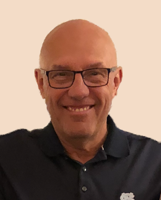 "I enjoy being a member of the coaching staff at Metro, one of the highest regarded programs in the nation. This is a great experience working alongside dedicated coaches with extremely talented athletes that expect to train at a high level and compete against the very best players in the country"

Dave has played and coached volleyball over the last 35 years at various levels. This is his third year at Metro. Last year, Dave and his wife coached the Metro 14 Travel team which won the Capitol Hill Classic Championship and qualified for Nationals. The 14 Travel team was ranked in the top 30 in the nation according to AES.

Prior to that Dave coached high school girls’ volleyball in New Jersey and was the Club Director and 18s Coach for the Cut Shot VBC. Dave’s experience includes 18 years of coaching collegiate volleyball. He has appeared and worked at more than 100 camps and clinics which includes being a member of the camp coaching staff at the University of North Carolina for the past 25 years.

Dave is a member of the East Stroudsburg University Hall of Fame for his accomplishments as a player where he was a 3 time team MVP, captain and selected All EIVA his sophomore, junior and senior years. His senior year he was also selected as the Outstanding Senior Athlete at the University. He is also a member of the New Jersey Institute of Technology Athletic Hall of Fame for his coaching accomplishments there. Dave is also one of 30 members of the EIVA Hall of Fame which represents 50 years of men's Eastern Collegiate volleyball.

Upon college graduation Dave played in the USA Men’s National Volleyball Team program, playing in the National Sports Festival, the World University Games and with the US National Team. He played for many years on one of the top club teams in the country, Sun East. In 1988 he was the MVP of the Caribbean Invitational where his team also won the championship. Dave played beach volleyball for 15 years, competing on several professional tours.

Dave and his wife Carrol live in Centreville with their four children and 4 golden retrievers. Dave and Carrol coach together for the Flint Hill School volleyball team where they have won 3 consecutive Virginia State Championships.