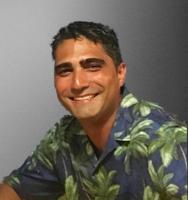 "I am excited to continue working with some of the best and most talented volleyball players in the CHRVA region."

Sam Danai has been involved in club volleyball in the Chesapeake region since the 2001-2002 season.  This year will be the 17th season that Sam will be the head coach of the 16 Travel team. Although last season was abbreviated, the team enjoyed success including finishing atop the CHRVA region.

Sam's volleyball career began in Pittsburgh, PA at Taylor Allderdice High School where he earned all-city honors and led his team to their first City Championship in a decade.