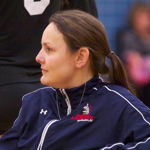 "I have had the pleasure of being involved in coaching at Metro for the past 17 years and Club Director for the past 5 seasons.  I feel extremely fortunate to surround myself with some of the best club volleyball coaches and staff in the country. It has been rewarding to watch our sport grow and become Nationally competitive in our area. In the short 5 years, we have qualified 14 teams at the Open level and 30 teams earned bids to GJNC.  Our teams in the East, South and North are expanding and have won numerous medals including Regionals and CHC. We look forward to pushing forward and making strides both at the National level as well as growing the sport of volleyball in our area"

Silvia Johnson is in the 6th season as the Club Director of Metro Volleyball Club, in that short time Metro has been able to achieve 14 Open Bids and put themselves on the National Stage.  In 2019 Metro's National Club ranking has moved from 89th to 16th and is the only club in the CHRVA region to be rank in the top 100!  Metro has also been able to grow from 18 to 30 teams, including expanding to new regions.

Since 2003, all of Silvia’s 18 Travel players have gone on to play at the collegiate level.

In 2020, even though the season was cut short the 18 Travel team was able to earn an Open Bid to GJNC.

In 2018  Metro Volleyball Club had two teams earn a medal at Nationals and 16 Travel had the highest finish in CHRVA history at the Open Level GJNC.

In 2018 her 18 Travel team medaled at GJNC at the National level. They also won a silver medal at the Northeast Qualifier in the Open level.

In 2017 her team made history by being the only team in the CHRVA Region to double qualify for the Open Division for the Girl’s Junior National Championships.

In 2016 Silvia Johnson’s team was the only team in the CHRVA Region to qualify for the Open Division for the Girl’s Junior National Championships.

In 2015 her team made history and became the first National Champion in the CHRVA Region by Winning the Girls Junior 18 National Division!

Prior to taking over Metro, Silvia (Panak) Johnson has spent 9 seasons being the head coach of the Metro American VBC 18 Travel team and was in charge of the coaching staff and training.

Silvia served as the assistant coach for American University alongside head coach, Barry Goldberg. During her time with the Eagles, AU won 5 conference championships and qualified for the NCAA tournament 5 times.

Johnson played her junior and senior years for American University, winning the Colonial Athletic Association (CAA) Championship both years. She was named team MVP in 1999 and American University Scholar-Athlete of the Year in 2000. A two-time All-CAA selection, Johnson was ranked among the NCAA leaders in aces in both of her seasons at American. Before transferring to American, Johnson played for Long Beach State and was a part of the undefeated 1998 NCAA Championship team. Johnson still holds the school record for most assists in a match at 75, which she accomplished twice in her career. She is the career leader at AU for assists per game and is eighth all-time in aces per game.

Silvia currently resides in Frederick, Md. with her husband, Winfred and their two daughters, Tatiana and Natalia.